We met with Lucas Gutierrez and Protey Temen in advance of their exhibition opening, ‘Knowledge Of’, at Aperto Raum, to find out about how they first connected and the processes behind the broader network of connections that led to their collaborative, discussion-based project.

Let’s start by talking about the title of the exhibition: ‘Knowledge Of’.

Protey Temen: When we started to discuss what the exhibition would be in the end, there was a nice moment after we had already gathered the material and were thinking that we just needed to create a new folder on the computer in order to continue work on the project. At the same moment – Lucas on his computer and me on mine – we created the folder with the word ‘knowledge’, which was then followed by ‘of’, and then…We both felt that was enough.

Lucas Gutierrez: It’s funny – there’s a word missing – but at the same time it’s very natural and honest to not have the right answer to fill in. It’s probably the most honest moment that we can have regarding our daily routines, and learning processes. It’s not about the institutional way of getting access to information that we are trying to talk about. It’s about this empty part that we just fill in: knowledge of emptiness, for example.

PT: In my practice, I call it dust – everything is made out of dust and particles. It’s pretty much the same when you experience emptiness or something that never actually exists in real life. For instance, you can experience a table, walls – we know about that object world – but when we start to think or speak about more abstract concepts, you need to find some marker in that space that is not yet existing. You need to point to the emptiness and put a marker on it so that it can be referred to in a future dialogue. ‘Knowledge Of’ is a self-referential marker to help us build up the conversation and the practice. It’s just going to be the first step, the point of departure, for what we have been discussing. It’s an open title.

LG: For me, it’s also about how many things that we consider new each day. That’s the part that can represent the knowledge in this case. 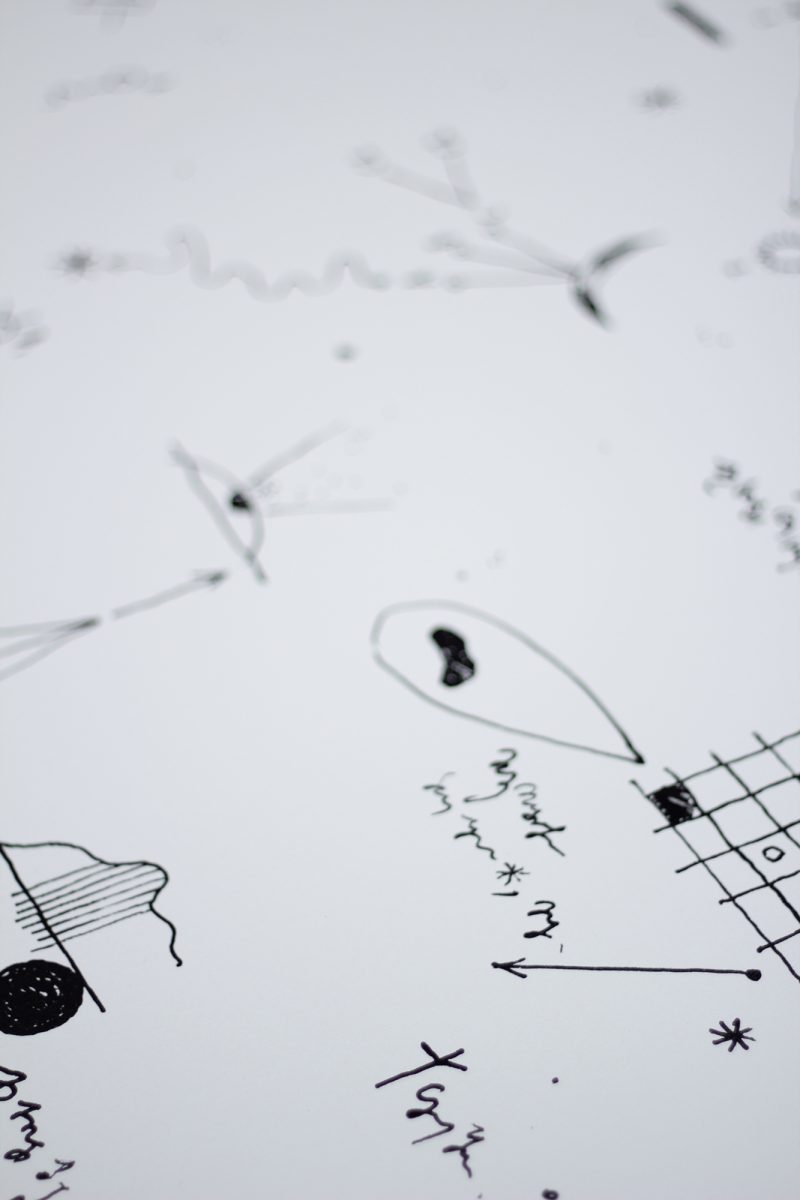 What was the impetus behind the conception of this exhibition? How did the interest in exploring this topic come about?

LG: Knowledge means something in our artistic practices. And we started talking about an exhibition that can bring together these schematic theories from Protey’s drawings and my processes of choosing infinite situations from real-time visualization, for example.

PT: I have an ongoing project called ‘Inner School of Open Studies’, which is my instrument for beginning to explain, at least to myself, what I have been doing as an artist: how do I connect my thoughts and my artworks; where’s the network between them? This is part of my job as an artist. The second part of my job is to work as a teacher at the university in Moscow, which helps me to think about the systems, the different kinds of approaches to gaining new experience, and connect them to absolutely uncontrollable things. Because you work with students and you don’t know what they are thinking about, and often it’s a surprise to you. So, I’m in between the processes of getting knowledge, sharing knowledge, and studying for myself. This is my reaction to that concept, as an artist.

LG: In my case, since I got into the digital art field, I’ve been dealing with the de-centralization of the process. I’m really focused on this medium that can show me, or is at least forced to choose, the layers that give me the feeling that they’re still new for me. It’s this simple, maybe childish idea – an insecurity, in this perhaps infinite way of looking for information.

PT: That feeling of insecurity regarding what’s going on around you is really important right now. The world is exploding – you can’t know everything anymore. It’s all just appearing and disappearing in the moment, and if you start to think about it, it becomes chaos.

The discussion aspect is placed alongside and centrally within the exhibition itself. Why is it important for you to initiate a dialogue within this context?

PT: One of the reasons I switched to more real-life mediums a few years ago, is that when everything is digital, you can’t really be sure what part of your everyday experience is real. We’re having this event, which is even more important than the exhibition itself. We could actually run this with just an artist talk, but we need to have it as part of something real – a real life event we can use as a background for future explorations.

The show includes assorted media from a video and a book, to a towel. Can you tell us a bit about some of the works that will be included?

LG: We started to talk in terms of an A,B,C structure – time-based, still, and 3D object – as a reinterpretation of directions. It became a form of looping, where my canvas is a canvas but the way to crystalize that canvas is in a completely different way: it’s a towel. It has a different moment, a different situation, and it also has this ironic way of looking at digital art itself. It’s just one frame of a 60 frames/second video, so it’s also about decisions.

In the beginning, I was thinking about making the 3D object more human, solid, touchable. But the acrylic piece makes the video far, or the video object – the 3D file – untouchable. There’s a looping of information happening between the three mediums that we’ve chosen: video art, canvas (solid, static and flat), and object – in this case, a book and piece that’s covered within a sort of bubble.

PT: The video is something that, by its nature, is always absolutely neutral. There is no such thing as a real-lfe video, because it can’t be exposed to real life. So, I really like the moment that Lucas’s video is concentrated on the towel – that really domestic piece. And in the same layer as the towel, I have my still image on a canvas, which is a more traditional, artistic medium. The object I’m going to exhibit, the book – which is archival in a way, for information, and is also like a page-by-page, analogue sort of video – explodes into the canvas, which is a traditionally stable structure. The video I’m going to show is an example of endless explanation, similar to the book, but the book is more narrative and is designed to be read line by line. The video points out that you cannot understand everything. It’s like a guy who’s trying to explain it to you, based on the book. And in the end, you end up realizing you have all the pieces but you just don’t get it.

Can you describe the collaborative process behind the exhibition?

PT: In the conversation about how our artworks connected to each other, when we were discussing what to exhibit, there turned out to be this self-linked, looping system of virtual/conceptual real life, and we realized that we have our own private map.We have so much in common, despite the fact that we’re not actually going in the same direction – we’re going towards each other. We’re looking to each other. It’s like trying to see your own perspective from a different point of view: that of your colleague. This is also knowledge, because when you have access to another person’s experiences and perpective, you can get more information. And for me, it’s also really important that we can organically correct, speak and choose what we’re going to do in the process. The questions about the title and everything were not synthetic at all. We didn’t need to put too much effort into theory or anything; it was just a discussion, which turned out to be an exhibition.

LG: For me, I just like him. And I think we have a lot of things in common. That’s what makes it a good opportunity to work something through, and share something. That’s the human part. 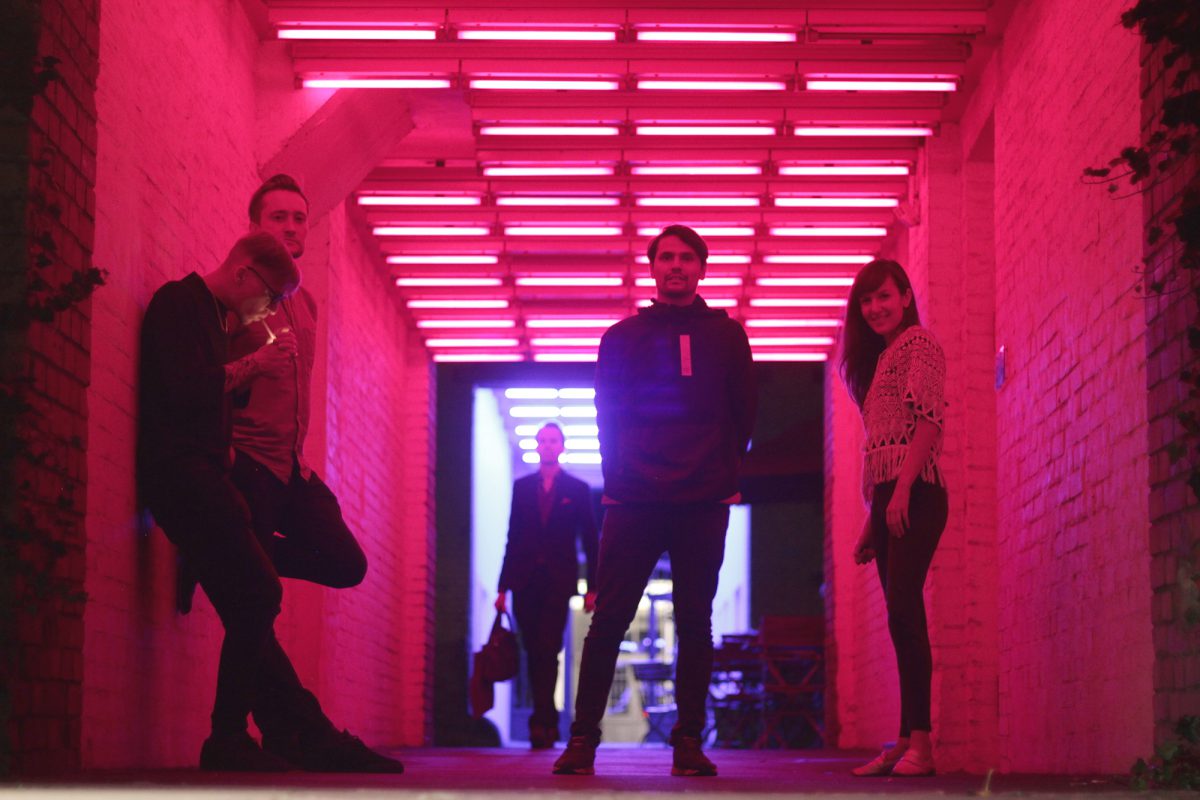 Have you worked together before? How did you start collaborating?

PT: It’s our first exhibition, working together in real time. We met four years ago for the web exhibition I’d been curating, called The Wrong Biennale. It was the first digital project. And then a year ago we decided that we need to come up with an exhibition, because we’d been having this conversation.

LG: In 2013, we just connected through the internet, because at that time I was living in Argentina. We shared the digital platform in The Wrong Biennale, which involved a talk of about 10 minutes in length. Then we discovered our processes and the media we are working with now.

PT: We had a pavilion. It was the first release of The Wrong Biennale, and maybe it was created just so that we could meet. I was a curator for the biennale and my job was to invite people to join the group – there were five of us in the end. But our works were different and we didn’t look at how they were connected. It took us four years to take another step in this conversation.

So, what’s coming up next for you – independently and/or together?

PT: I’m just trying to finish my book – of the same title as my ongoing project – ‘Inner School of Open Studies’, which will be the first textbook that I’ve published. It’s the display copy of this book that will be on view in the exhibition.

LG: At the end of September there will likely be the preview of my complete series of towels – each with one frame of 60 frames/second – which are a way of selecting, and perhaps immortalizing, a 3D, digital object. And I’m also working now on some new topics pertaining to digital relations, and digital narcissism. I’m focusing more in the direction of how we feel about digital platforms, and what will be left for future civilizations if we are just stuck on digital platforms all the time.